General Membership Meeting of the Vernon Placer Miners Club
Met November 7th, 2017 at the Hall at 1204 30th Ave, Vernon BC. President Gerry Morrison opened the meeting at 7:07 PM. Note-taker was Cal Olsson 32 members and 5 guests, Mason, Paul, Gordon and Sally Herriot,all from Vernon attended the meeting. Kim Creed also brought an interesting guest who originally hails from the Celestial (now communist) Empire of China. This guest lives here now and is going to make sure Telus phones run efficiently in all parts of BC.
The minutes of the last meeting were read. Lorne’s phone number was corrected to 250-803 2921, and Karen volunteered to help the Chairperson of the BC Open Committee; not be, the Chairperson: then the minutes were adopted by a show of hands.
 Old Business Arising out of Last Meeting’s Minutes:
 Louie was reimbursed for getting us some new five gallon pails with metal bales.
 The gold recovered. from the gravel cleanup was 2.66 gms. Once again thanks to the Yonkmans and all the members who came out to help!
 Merv brought up that our BC Open advertising isn’t getting out through the chamber of commerce as expected; we should explore other ad avenues. Some avenues discussed were: seeing if the BCPMA would let as advertise to other clubs through their network of associations, and also, ask Diane Fulbrook, if she would be willing to let us use her media contact list to get the word out that way.
 There was a debate about the meaning of ‘family’ in the family membership dues. Donna came up with the definition of ‘anyone living under the same roof’. This seemed satisfactory as it would include ‘fur kids’.
 Gerry Morrison is going to take the white trailer if he can get it insured. Past President Merv Mathers is going to find the registration for it as he said the club had once had it registered and insured.
Correspondence:
 Karen MacKenzie hand delivered us a circular about an upcoming Vernon Lapidary event on nov.18th,19th .We are going to participate with a gold panning option. 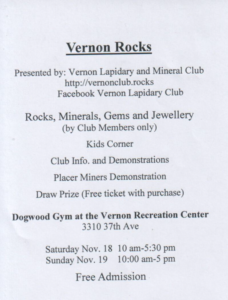 Reports:
 Membership Report by Donna Smith.
 15 families are currently paid up members in good standing.
 15 Life timers in good standing
 3 Honorary members in good standing.
Social Convener’s Report by Donna Smith:
Good news, Linda MacDonald is now remarried. Marie Lewis (widow of Merv Lewis) said to say hello
Best Wishes for a happy birthday for November 2017 go out to:
Norman Martens Jonathan Paull Marilyn Allan Linda Tkaczyk Clint Batchelor
Happy Birthday everyone!!
Condolences go out to Bernie Klewchuk in the hospital after a car accident last Friday!
Thanks to Faith Lanthier for this meetings goodies at coffee time. Hopefully she will share the recipe for the date balls.
 There is a common dues due date of October first. Dues are $20.00 per year per family, Oct. to Oct. However there is half price deal if joining the club from May 1st. on till end of season.
Treasurer’s Report by Mary Erickson, read by Lorne Tkaczyk. You have to attend a meeting to get any financial figures.
Income………. $______________ Expenses……….$__________ Balance…….$_____________, Adopted by a show of hands
 BC Open Report by Lorne Tkaczyk
The Enderby Lions have given the club the two big tents we use at the BC Open. Thanks Lions! The tents are stored in the C-Can.
Thanks to all of the volunteers who helped make the BC Open such a roaring success this year we are looking forward to an even more successful BC Open in 2018.
New Business:
 Jonathan Paull volunteered to head the BC Open Committee for 2018. Karen Mackenzie has agreed to give him whatever support she can. Bill Allen has volunteered for the committee as well Lorne Tkazyk has volunteered for the committee as well.
 Cal Olsson moved that all doodads be turned off during the meetings. No seconder could be found so the motion didn’t move forward.
 Karen MacKenzie moved we make postcards with the clubs contact info etc. on front and back for handout at events and such. Jonathan Paull’s wife, a graphic designer may design them for us. Seconded by Terry Regier. Discussed voted on and passed.
Announcements
 Lorne brought a pot luck list to the meeting to see if members would bring to the Christmas dinner party the same items again. If you missed the meeting you may also get in touch with Lorne at 250-803-2921 to put what you’re bringing on the pot luck list. You can email him at lltkaczyk@gmail.com
 Bring a gift for gift exchange and write on it for male or female if you want. Ten dollar minimum.
 Ken Cuffe is still attempting to get in touch with Santa Claus to see if he can make it to the Christmas party this year. We had a guest originally from Australia at the meeting. What with globalization it’s comforting to know that Santa has six white boomer kangaroos for backup in case his reindeer have trouble.
 Check on your reservations for this year’s BC Open at the Enderby Riverside RV Park to make sure they are ok.
Presentation;
We were to have a presentation on counting colors but due to time constraints it is postponed till next February.
Gordon Harriot the first nugget door prize, and Ken Montie the second.
Tom Gerling won the 50/50 draw $30.00.
The meeting adjourned at 9:05 PM.
Political Liaison and Information Committee. Report by Rick Petersen
There was the BCPMA general meeting this October 21th at the Coast Hotel in Kamloops. Unfortunately Rick is down with the flu so we’ll have to wait till next meeting for his report.