Met February 6th, 2017 at the Hall at 1204 30th Ave, Vernon BC. President Gerry Morrison opened the meeting at 7:00 PM. Note-taker was Cal Olsson 35 members and 5 guests; Rob and Pat Corey from Kelowna, John McFarlane of Winfield and a placer miner from Edmonton attended the meeting. The minutes of the last meeting were read. Corrections: Gerry said he was going to look into the white trailer’s condition not buy it; Jonathan Paull’s name was written as Alan Paul ( my old mine foreman) instead of Jonathan Paull as it should be. After corrections : the minutes were adopted by a show of hands.

Membership dues to the BCPMA paid

Update on the postcards with the clubs contact info etc. on front and back for handout at events and such. Jonathan Paull is going to try again to see if his wife, a graphic designer will do up the cards

Ernie Erickson has Diane Fulbrook’s media contact list Although it seems a bit out of date he sent it to the BC Open President to use.

Invoice from Enderby and District Chamber of Commerce for $275.00 for BC Open advertisement in the Regional Travel Guide and Itinerary planner. Mary said this was already paid.

29 families are currently paid up members in good standing.

There is a common dues due date of October first. Dues are $20.00 per year per family, Oct. to Oct. However there is half price deal if joining the club from May 1st. on till end of season.

BC Open Report  by Jonathan Paull

Raffle tickets this year will be in groups of 20 rather than 10’s like last year.

Rick Peterson has an ongoing ad on Castanet about the BC Open.

This year, 2018 going back to awarding larger gold nugget prizes to the winners at the BC Open gold panning Championship rather than the trophies. However we’ll still give out the Elton memorial trophy and a perhaps a couple others.  The money saved can be used to purchase even bigger nugget prizes. Mike Spotten has volunteered to do up the prize boxes.

Thanks to all of the volunteers who helped make the BC Open such a enormous success in 2017 we are looking forward to an even more successful BC Open in 2018. Please find it in your heart to volunteer  again to help in 2018.

Ernie Erickson moved that we have a survey sheet for those who sign up at the BC Open. The question would be ‘how did you hear about the BC Open? Donna suggested a draw be held of those who did the survey, for a free club membership, and a tangible small prize, Seconded by Cindy Rachwalski; discussed; voted on; passed.

A motion was put forward to buy a gorgeous gold and diamond necklace from Mary Erickson for $400.00 (nine hundred dollar or more  value) to be first prize in the BC Open raffle. Seconded by Terry Regier. Discussed, voted on and passed.

Ernie moved that Lorne be asked to do up a couple of card samples (like Karen showed us that the Lapidary Club uses) for the club to choose one of them to go with. Seconded by Mary Erickson, discussed, voted on ,passed.

Lorne Tkaczyk thanked everyone for their help making the Christmas party so enjoyable. Hopes someone will step forward to co-ordinate our next one.

Check on your reservations for this year’s BC Open at the Enderby Riverside RV Park to make sure they are ok.

Terry Regier said we should try to get more up front notice for doing panning events like those Okeefe ranch, and village green mall asked us to do.

Donna Smith requested a couple (or more) volunteers to go around to business’s for support donations for the silent auction at the BC Open. The guest couple from Kelowna volunteered to go around to the wineries in the Kelowna area. Gerry Morrison volunteered to do one of the list  Donna had and the Lumby/Coldstream area and Tim Hortons. Donna still needs one more volunteer so is still looking for someone.

Keep June 8th to 10th open on your calendar to attend Lumby Days event. It’s a lot of fun with free camping, panning tubs and hopefully Ted Turner will drive his vintage truck in the parade with our banner.

We had a talk by the old Brush Popper about two applications for counting colors:

Discussion about making up pay dirt vials for ‘teaching panning’ and panning competitions: by mesh size versus weight of the gold, (reference to gold size cards and loop with scale).

When prospecting, see following example: (Click for a larger version) 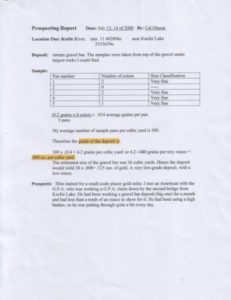 Best Wishes for a happy birthday for February 2018 go out to:

Mike McKenzie won the first nugget door prize, and John McFarlane the second., which he generously donated back to the club.

Wayne Thompson  won the 50/50 draw $35.25. He generously donated this back to the club for Mike to use in making up the gold nugget prize boxes for the BC Open Gold Panning Championships