General Membership Meeting of the Vernon Placer Miners Club Met November 5, 2019 at the Hall at 1204 30th Ave, Vernon BC. President Gerry Morrison opened the meeting at 7:07 PM. Note-taker was Cal Olsson. 32 members attended the meeting. The minutes of the last meeting were read and after correction that we have only 2 honorary members was adopted by a show of hands.
Old Business Arising out of Last Meeting’s Minutes:  Ruth Huizinga is going to the Vernon museum to get some information about the early Vernon Gold Panner’s group
Correspondence:
President Gerry received email that the Club’s society report was due.
Reports:
Membership Report by Donna Smith.
8 families are currently paid up members in good standing.  14 Life timers in good standing.  2 Honorary members in good standing.  There is a common dues due date of October first. Dues are $20.00 per year per family, Oct. to Oct.
Treasurer’s Report by Donna Smith. Income………. $______________ Expenses………..$__________ Balance……..$_____________, Adopted by a show of hands.
BC Open Report by Gerry Morrison Discussed recommendations from Liana Bjerstadt about how to make the 2020 BC Open even better. A junior trophy sponsored by Bob at Authentique Plaque and trophy will be up for grabs this year. We need to get the pics of the prizes so we can get the raffle tickets printed up early this year. Those volunteering to round up prizes and sponsors from local businesses can get started in January as the early birds seem to get the worms.
It’s probably a good idea to get in touch with the Enderby RV Park to confirm your site reservation for 2020. New Business:
Terry and Cindy Regier presented with a Lifetime membership award.
Announcements.
Brent Zvonarich volunteered to help Mike Spotten get some T shirts to get his printing-on- cloth machine going.
Brenda Morrison volunteered to cook the other turkey for the Xmas dinner.
Yard sale to be held on the 17th and 18th of April 2020
Victoria at the Riverside RV Park is asking for a 50% deposit on sites booked for the BC Open may long weekend.
Christmas dinner on December 3rd.
Ruth Huizinga, Robin Jenner and Cal Olsson will work together as an itinerary committee to come up with an itinerary for 2020 club outings and events.
If you can manage it please come out and help Mike and Karen McKenzie with the gold panning at Vernon Rocks event.
Election Results by Louie Yonkman, Elections Committee Chairman:
President    Gerry Morrison
Vice President   Jonathan Paul
Secretary    Cal Olsson
Treasurer   Donna Smith
Membership   Donna Smith
Raffle and Sponsorship committee    Donna Smith
Phone Committee Chairpers   Jerry Stainer
Political Liaison & Information Committee Representation   Rick Peterson
BC Open Gold Championships Chairpersons  Jonathan Paull and Mike Spotten.
Volunteer Appointments by President Gerry Morrison were for Refreshments and Correspondence: Donna Smith.
Presentation; We had a long and interesting talk with local historian and placer prospector/miner Captain Al Woods. Mainly centered on the Keefer lake area. You really had to be there to benefit from this first hand report. Excellent presentation: thanks Captain Al!
Social Convener’s Report by Donna Smith: Best Wishes for a happy birthday for November 2019 go out to:  Mark Panich     Marilyn Allan   Jonathan Paull     Ryan Courtemanche     Dave Poiriere     Linda Tkaczyk
Donna asked for update on Bernie Klewchuck.  It is said that he wants to not have company until he is stronger.  He is home now, but fighting taking his medicine as directed.
Karen Mackenzie is asking for help for the learn to pan tubs at their rock and gem show.  Attatched is a picture of their event.
DRAWINGS  Ken Montie won the first nugget door prize, and Robin Jenner the second. Terry Regier won the 50/50 draw $26.50.
The meeting adjourned at 9:15 PM.
Political Liaison and Information Committee. Report by Rick Petersen Rick gave a report on the BCPMA general meeting this October in Kamloops. He also gave us his input into the bulletin 38 points for forwarding to the president of the BCPMA who will be in touch with the govt. regulators about it (hopefully). Any questions or concerns get in touch with Rick at 250-681-0908 or email trimguy@live.ca. 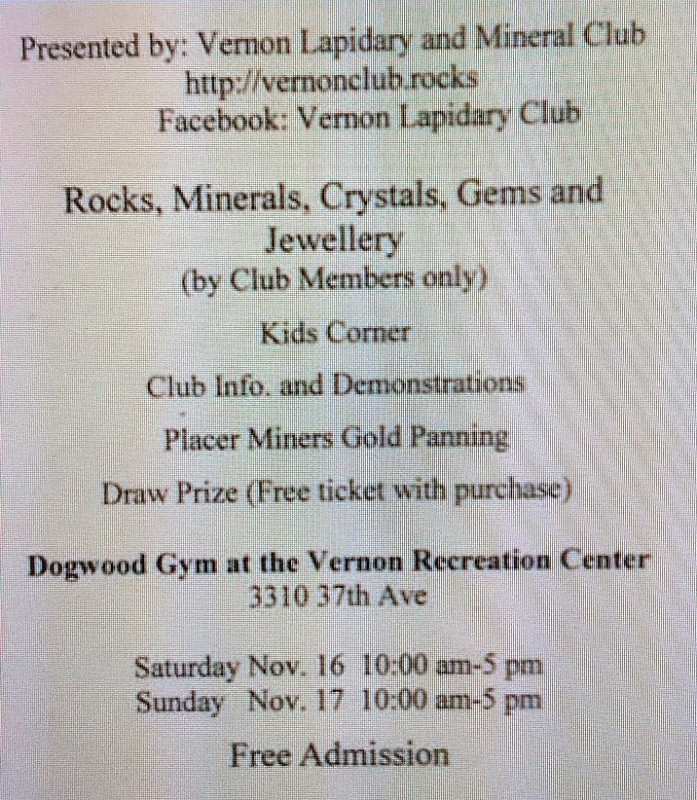